The Korean War has been more or less forgotten, so this article reminds us of what went on in one battle in Korea. 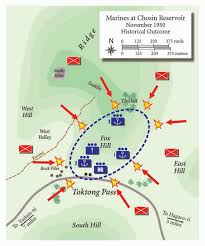 The documentary Chosin was released in 2010, the 60th anniversary of the Battle of Chosin Reservoir in which Army and Marines units were flanked on all sides by Chinese forces which had crossed into Korea.

Not only were the American forces trapped and outnumbered, they also had to fight in the most adverse weather conditions imaginable, with temperatures as low as 40 degrees below zero.

Frostbite was common as 12,000 of the 14,000 American troops at the Battle of Chosin contacted some form of frostbite.

In addition the Battle of Chosin was fought under icy conditions with snow falling during some of the fighting.