Highway Patrol was one of many classic television shows, that are either hard to find or not on television today. The plots of the show were simple, which is unlike some shows today, that take awhile before you even figure out who the bad guy is.

Broderick Crawford was perfectly cast as Chief Dan Mathews in Highway Patrol. Chief Mathews portrayed a no-nonsense cop, who was famous for saying 10-4 on is police phone. The problem today is that it is seldom seen on television today or if it is, then it is relegated to an early morning slot like 4AM. The show to me was better than a lot of detective shows being seen today. The show was on television from 1955-1959. 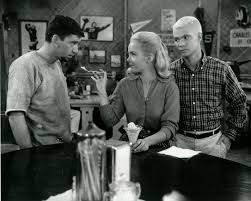 Bob Denver, Tuesday Weld and Dwayne Hickman in a scene from Dobie Gillis.

The Many Loves of Dobie Gillis (1959-1963) was one of my favorite shows to watch. It doesn’t seem possible, but Dwayne Hickman who portrayed Dobie is now 80 years old. 51 years have passed, since it was last seen on network television. Actors who appeared on the show and went on to greater fame included Bob Denver, Tuesday Weld, Warren Beatty and William Schallert. Frank Faylen who played Dobie’s father appeared in the Christmas classic movie It’s A Wonderful Life as a cab driver. This is another show that as far as I know can only be found in the early morning hours.

William Bendix on The Life of Riley was one of my favorite shows to watch. The show had already been on television a year, before we even bought our first TV set in 1954. Loved watching Bendix portraying Chester A. Riley, who was the polar opposite of Ward Cleaver on Leave it to Beaver and Jim Anderson on Father Knows Best who portrayed next to perfect fathers on television. Riley on the other hand was a stumbling, bumbling oaf, that while he had good intentions had a proclivity for being put in the worst possible predicaments. Riley was known for saying “What a revoltin’ development this is”. Sadly, as far as I know this show cannot be found anywhere,  on television today 56 years after the last show was aired.

Anyone that has served in the military has encountered someone who reminded them of  Gomer Pyle at some point in their career. Jim Nabors, who left the Andy Griffith Show to portray the same character, that he had portrayed in the city of Mayberry, North Carolina. The casting director could have taken years, to cast the role of Sergeant Vince Carter, but they got it right the first time, by hiring Frank Sutton for the role. Sadly Sutton died 40 years ago in Shreveport, Louisiana when he was acting in a dinner theater.  Gomer Pyle used to also be shown in the early morning hours, but the last I knew it is not being shown on television today.

Father Knows Best is the first show I think of when thinking of a typical American family. They had their share of problems, but they were solved by the time the show ended 30 minutes later.  I was in the Veteran’s Hospital in Houston and the Antenna TV channel had Father Knows Best and it was fun to watch the show, and helped take my mind of the cancer surgery I had recently, even if only momentarily. This is only channel that I know of, that shows this show 54 years after the last show aired on network television.

Mannix was one of my favorite detective shows on television. Mike Connors who portrayed Mannix is now 89 years old. He made his last television appearance on Two and a Half Men in 2007. I remember the show, as a show that could hold your interest. Gail Fisher portrayed his secretary Peggy Fair and was the only one on the show besides Connors, that appeared in at least 100 episodes.Fisher died 14 years ago tomorrow (December 2). This show is not seen on television today as far as I know.

I recently saw an episode of Route 66 on a streaming service and it reminded me, that I had not seen an episode of the show in the last 50 years, since it left network television 50 years ago. The episode as described at imdb.com:

Incident on a Bridge

Tod and Buz, in Cleveland, Ohio working as laborers on a “three-week job at a gravel yard”, stay at their Russian supervisor’s home. He has a mute daughter who has a miserable life. When a fellow Russian, whom the community has ostracized, shows his love for her tragedy follows. The two ill-fated people meet an uncertain end. Nehemiah Persoff portrays the father of the mute daughter, who is portrayed by Lois Smith. Classic television fans will notice Allan Melvin, who was later Sam the butcher on Brady Bunch and also appeared on episodes of Andy Griffith and Sgt. Bilko shows.

Jack Webb 1920-1982
Dragnet 1951-1959
I never was too enthused about the newer 1967 version of Dragnet, after having seen the original  black and white version from 1951-1959. I like color television, but still don’t mind watching black and white shows, since they let you concentrate more on the show, than the color scenery shown on a color program.

Jack Webb and Ben Alexander shown in scene from Dragnet.
I have always liked the photo of Joe Friday’s partner Frank Smith in the middle of the above photo. He seems to be falling asleep on the job and is grabbing some shuteye, while Friday does all the work and questioning. Dragnet to me was television at its best. These shows are rarely if ever seen today, since the cable networks seem to opt for the color version, with Harry Morgan of M*A*S*H fame portraying Officer Bill Gannon. I am not saying the later version was not a good show, but after you have seen the best, then you don’t care as much about later version.
Note – Anyone that knows where any of these shows can be seen today are welcome, to post that information to the comments section…Thank you.
Advertisement